Mafia Island is a unique destination off Tanzania’s coast with secluded sandbars, nesting turtles and migrating whale sharks. It is much less known and definitely much quieter than Zanzibar, but it offers the most incredible diving experiences and embodies the real definition of barefoot luxury.

Mafia is part of a small archipelago consisting of one large island and several smaller ones, each featuring a unique history dating back to the 8th century. The name “Mafia” has nothing to do with Italian mobsters but is instead derived from the Swahili mahali pa afya, meaning “a healthy dwelling-place.”

Still little-known to travel agents, tour operators and travelers, Mafia is not a tourism hot spot. In fact, the local tourism authority says the island receives fewer than 7,000 tourists a year staying an average of nearly five nights. “Mafia attracts those who have a wish to get away from the crowds and explore something new and experience nature and local culture that has not been disturbed by urban or industrial development and mass tourism,” its website said. 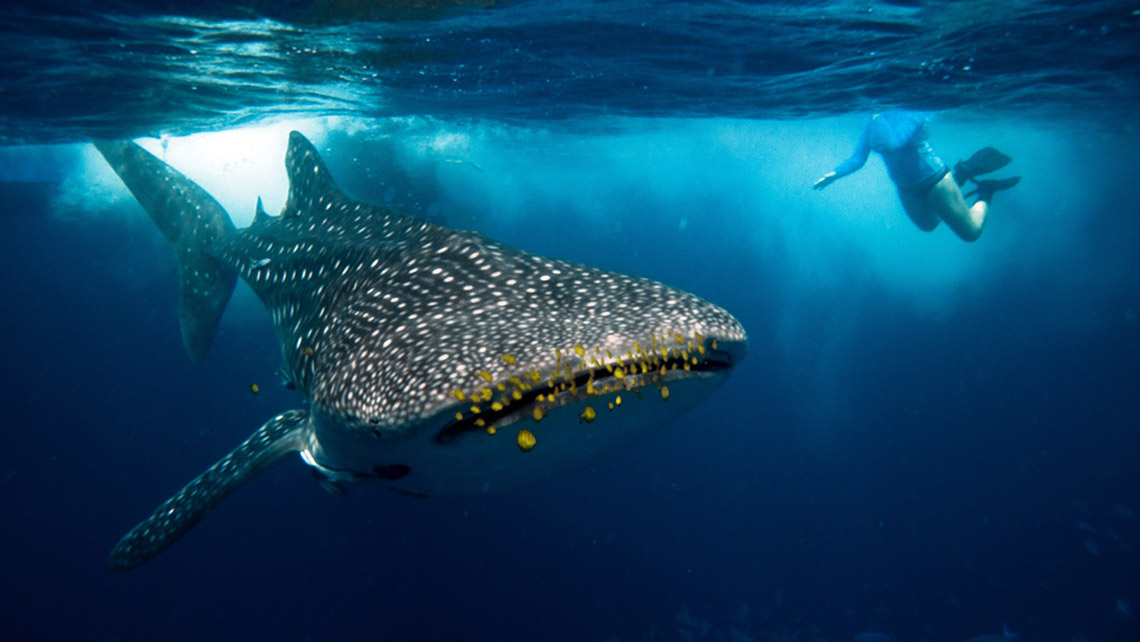 A snorkeler with a whale shark off Mafia Island. Photo Credit: Massimiliano Finzi/Shutterstock.com

Mafia is a true water paradise with some of the richest reefs in the world. With groupers, clownfish, octopus, rays, turtles and whale sharks frequenting these warm and clear waters, the island is referred to as the coral garden of East Africa. The Mafia Island Marine Park was formed in 1995 to protect the archipelago’s reefs and more than 460 species of fish.

Almost all of Mafia’s best diving is at depths of less than 30 meters. Beginner divers and snorkelers will enjoy the shallow reefs of Chole Bay, and experienced divers will be able to admire a long coral wall outside the bay with huge stands of blue-tipped staghorn corals. Large predatory fish and turtles are common and surprisingly unaffected by approaching divers.

The island’s conservation projects are equally impressive. On Juani Island, just off the coast of Mafia, Sea Sense is working in partnership with local communities to monitor and protect sea turtles. Travelers can witness hawksbill turtles nest on the more remote beaches and watch the tiny hatchlings emerge. Sea turtle ecotourism provides direct benefits for communities such as the freshwater harvesting system and latrine block at Juani Primary School in Mafia Island Marine Park.

On Juani, travelers can visit the ancient city of Kua dating back to the early 12th century. The archaeological site features several mosques, a cemetery, a palace with large storeroom, a dispensary and a school, all of which were funded by the then-lucrative trade in cowrie shells. From this site, one can tell that Kua was once a place of considerable local importance.

Chole Mjini on tiny Chole Island is said to offer a castaway fantasy amid a mangrove forest with ancient baobabs. The jungle island retreat offers seven quaint little treehouses amid the natural vegetation. Each of the luxury treehouses offers views of the sea; some are close enough to be lulled to sleep by the sound of the tide trickling back through the mangrove roots. Most treehouses have a second level to accommodate children.

Pole Pole is another great accommodation option. This exclusive ecolodge offers an unpretentious and laid-back atmosphere. The lodge features seven bungalow suites, perfectly blended with the surrounding tropical garden. All the produce used at the lodge is locally sourced to ensure a minimal carbon footprint.

For the ultimate luxury experience, it is possible to rent your own island. Thanda Island is available on an exclusive basis only and offers a single luxurious villa and two traditional Bandas (beach chalets) in the Indian Ocean.

Getting to Mafia Island is through short 30-minute charter flights from Dar es Salaam or Zanzibar Island. Mafia has daily domestic flight connections to all of Tanzania’s far-flung safari destinations, so logistics are now easy.